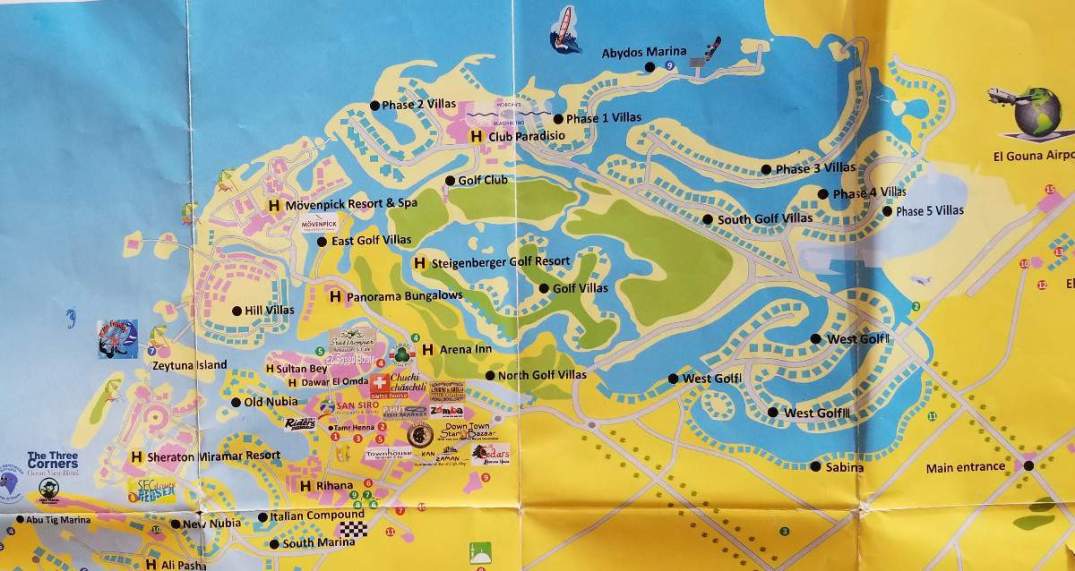 Yesterday, Erin decided to bag her tennis lesson with Mourid, the Gouna Tennis Club pro. Instead, we went for a 2-hour walk from the West Golf compound to the Abydos marina. Abydos is where the “Phase 1” white villas are located, and it is reputedly the most expensive and exclusive part of El Gouna.  Frankly, we saw quite a few rather dilapidated houses, as well as numerous multi occupant housing units. When we got  to the Abydos marina, a group of tourists appeared and walked on the pier to a waiting boat.  I wouldn’t pay millions for a house, only to be subjected to that. Then we walked back to Downtown Gouna, cutting through the Steigenberger Golf resort.  I stopped to take a leak there, and some WC attendant asked for 10 euros after I finished. That’s 12 dollars, which of course I refused to pay, but in a nice way. We had cheeseburgers at Jobo’s, and Erin ordered a mixed fruit drink consisting of Guava, Mango, and Strawberry.  She loved it! Unfortunately it was quite cold in the shade, and an Egyptian couple showed up, sat at the row of tables in the sun and of course commenced sucking on cancer sticks. 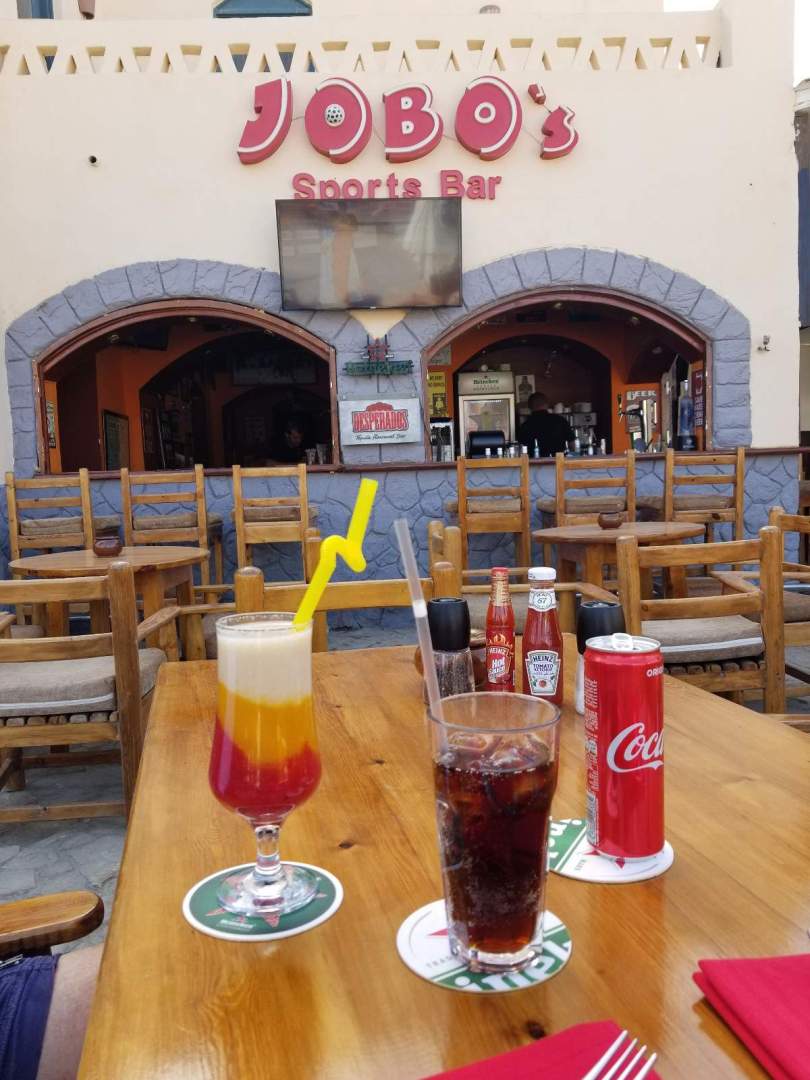 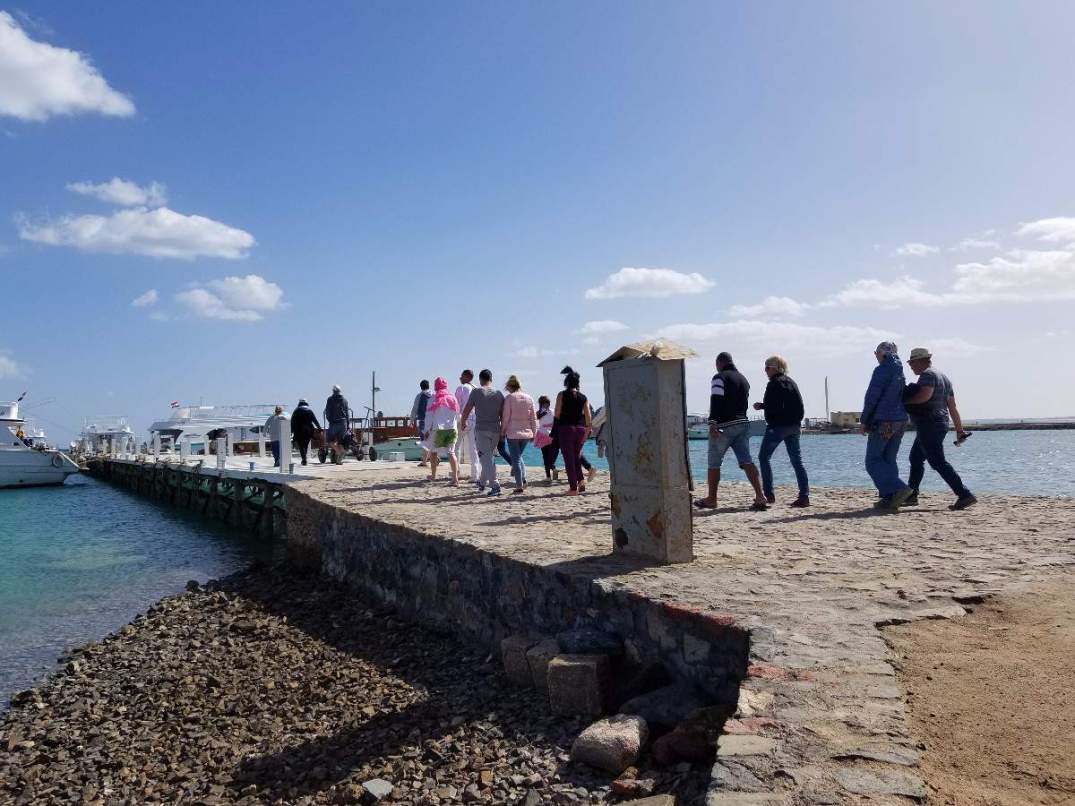 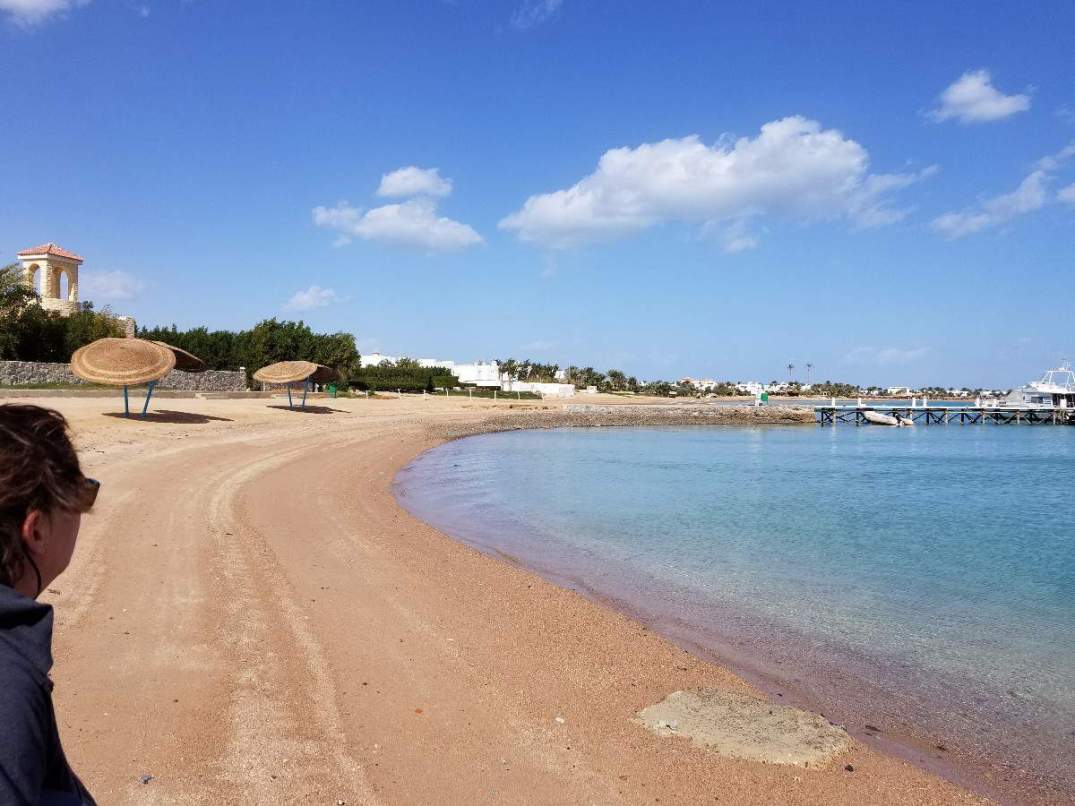 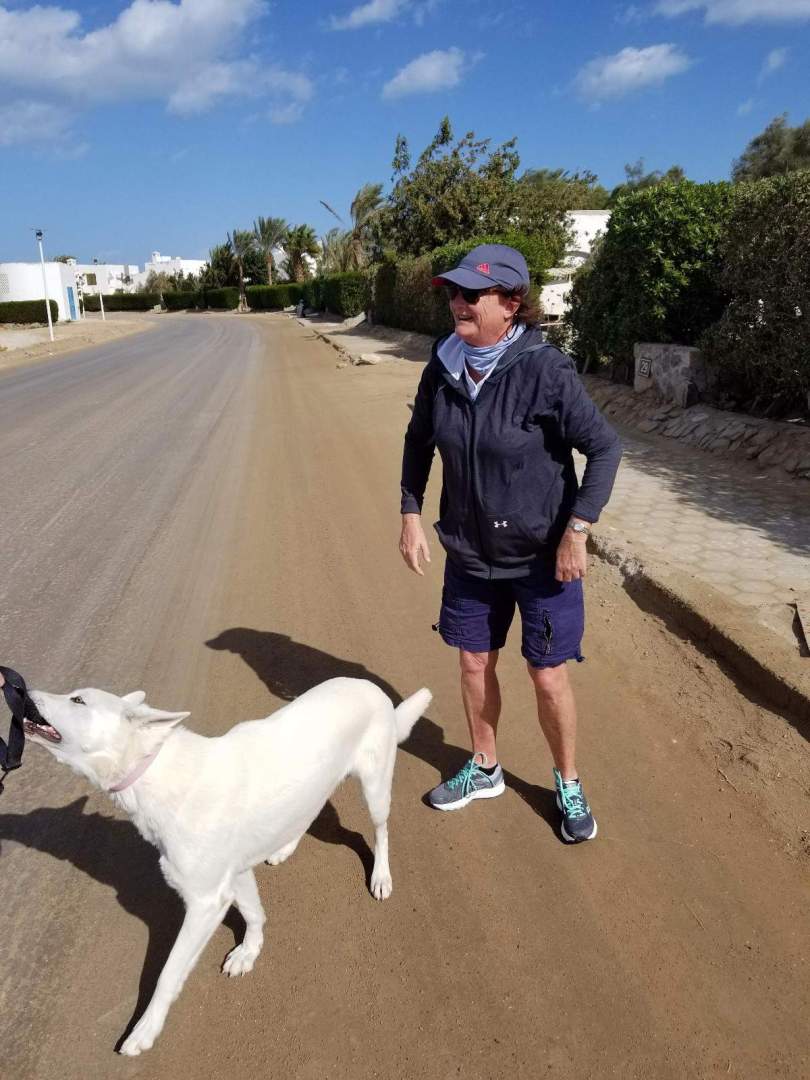 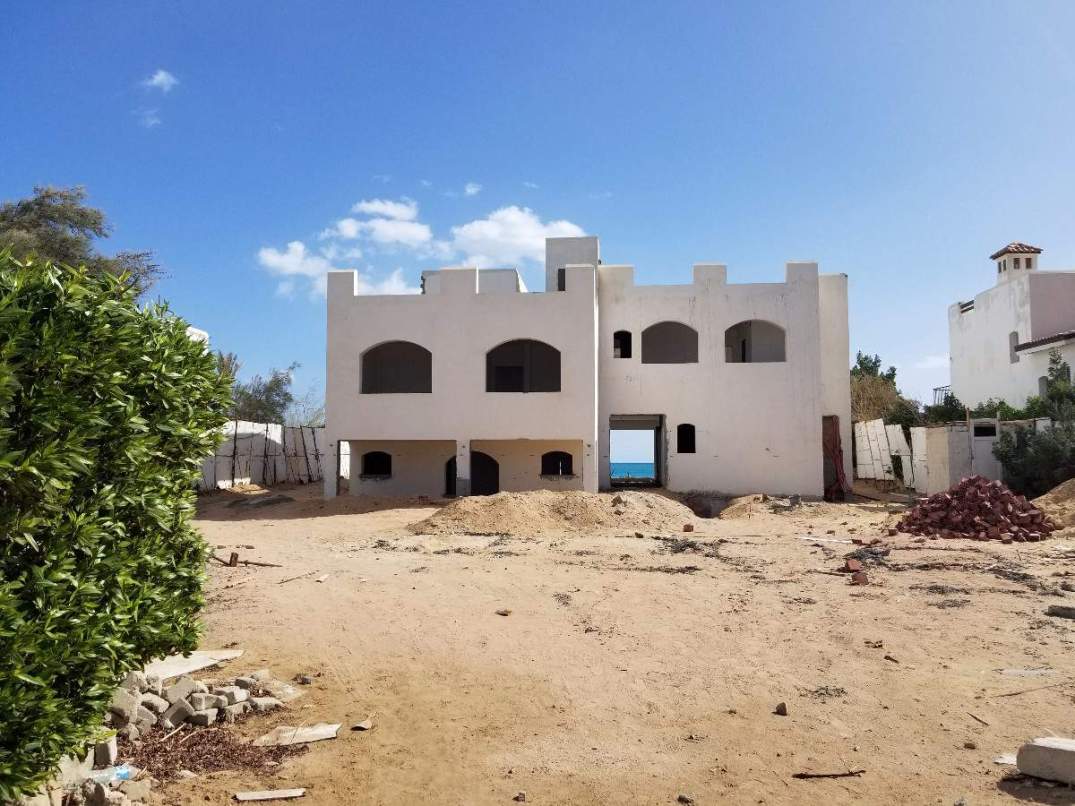 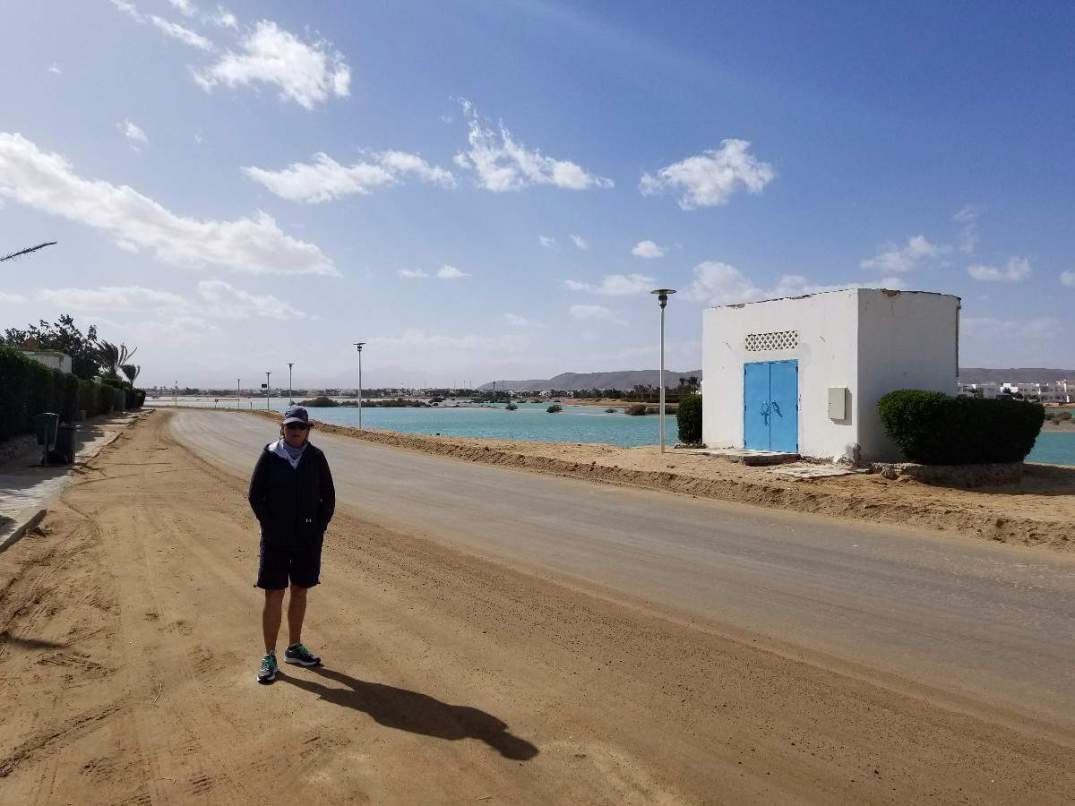 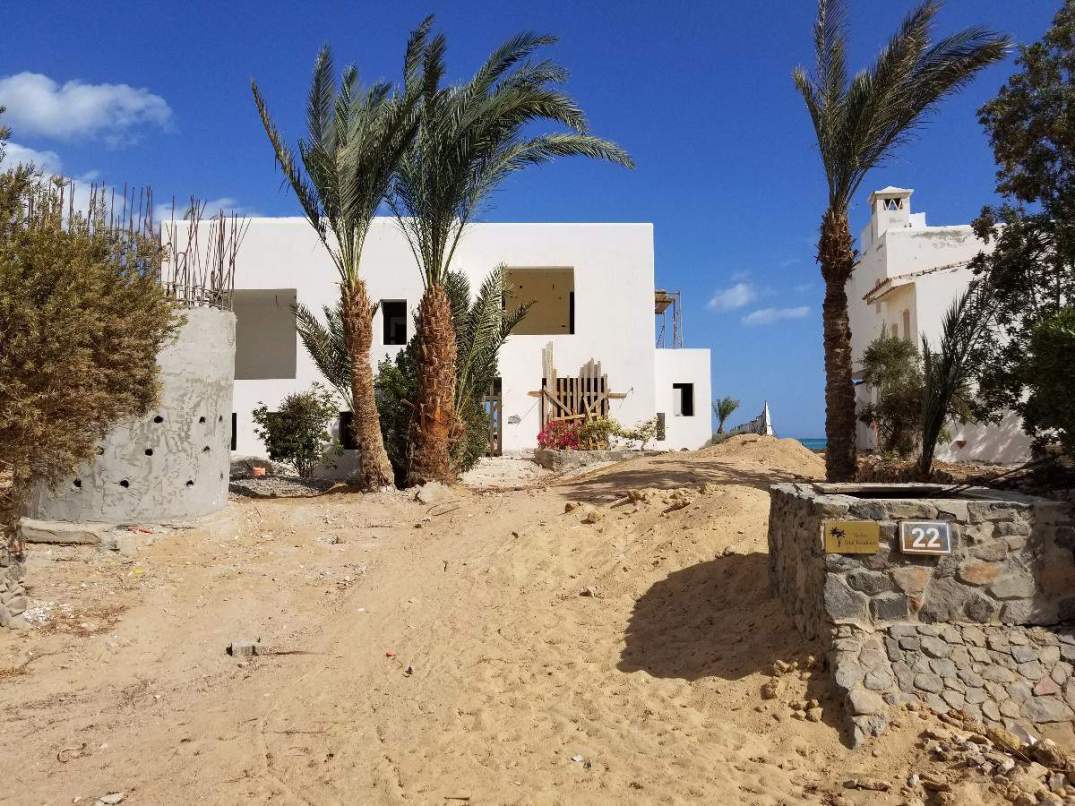 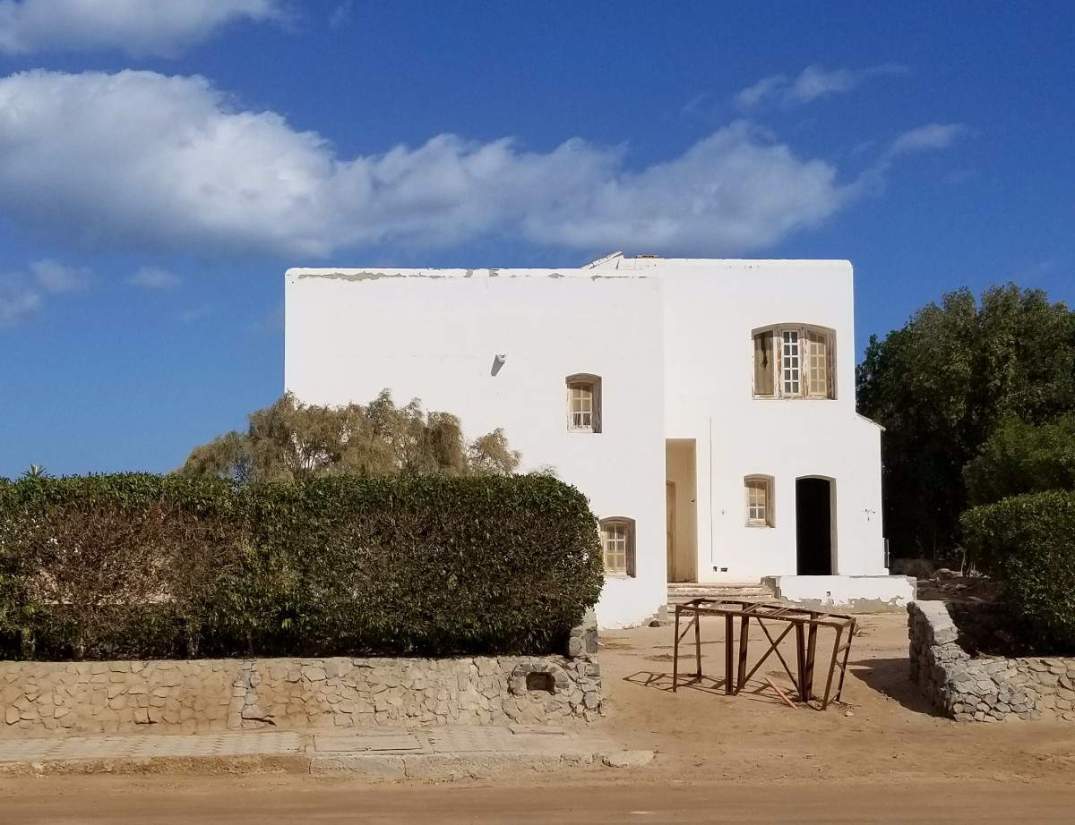 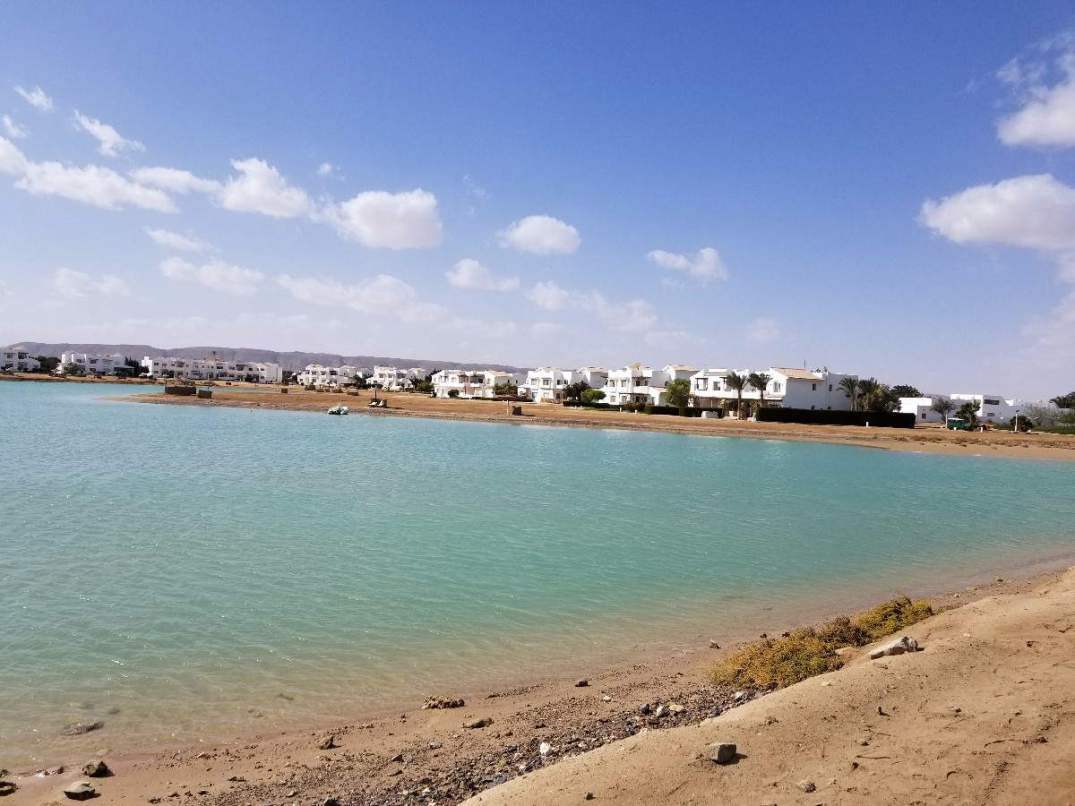 By the time we got home by bus, the sun was lower, and it started getting quite cool — even though it was only 2PM. We sat by the pool under the cover of blankets, and within an hour or so, I started feeling quite sick.  I noticed I had a mild case of vertigo the last 2 days, but now it was really bad, and my joints ached terribly, and my teeth started chattering.  I immediately thought I had contracted West Nile Virus, but it was just the flu — even though I took my flu shots before leaving America, way back in August.

Which brings us to the main problem of Gouna in winter.  The days are really short here in December and January, with the sun setting before 5. So you have 13 hours of darkness every night, and once the sun dips over the mountains, it gets bone chilling cold.  The desert night in winter is talg, or ice, as they say in Arabic, and frankly quite unpleasant.  Add to that the fact that the villa floors are all made of a polished stone substance, and you end up with this frigid mausoleum effect — all day, not just at night. I spend all evening shivering on the couch under three thick blankets.

The last few days,  it has been so cold that I have been waking up with my joints aching and stiff. Yesterday I suddenly developed a really bad sore throat. Good thing I asked my wife to bring Listerine, which you can buy in Egypt, but only the Zero Alcohol variety, which kind of defeats the purpose of killing throat germs.

I could buy a heater but I am afraid the wattage would blow the fuse boxes and I do not want to pay for repairs of that sort, not to mention the no doubt exorbitant cost of all that extra electricity.  I tried to turn the AC unit into a heater, but that did not work:  it just acted as a fan, sucking in cold outside air.

So the last two days, Erin and I have resorted to boiling the kettle with the lid off to get some warm, humid air in our lungs to help our dry cold cough, warm our hands, and clear out our stuffed, headache-inducing sinuses with steam, which also does a good job of moisturizing our faces.

The bottom line is this.

I am sick of being cold all the time.  It is chilly in Florida right now, but in the next few days, the weather will return to perfection, and is likely to remain that way for the next 3 or 4 months. Plus, there is real sand in Florida beaches (unlike the red dirt of the Red Sea littoral), and actual fish by the shoreline, which I have yet to see here, and the water is not semi frigid most of the year. And today, the wind picked up again; so outside it’s hazy (the air is filled with dust from the desert), and on the cool side. Maybe my arthritic knees make me a senior retiree with special needs, but I like to be able to bake in the sun, warm up my body, but without risking life-threatening sunstroke. This you can do in Florida for at least four or five months out of the year.

It appears the only time there is nice weather in El Gouna is April and maybe a few weeks in October.  The rest of the time (in late Fall, Winter, and early Spring), the days are pleasant enough (if you can put up with the frequent trade winds) but short, with the nights a fearsome bone-chilling desert cold (remember: no  central heating), or, alternatively, you have to put up with boiling summer days and night for many months with temps exceeding 100 F.

Add to that the unreliability of the bus service (as opposed to having a nice SUV to tool around in Fla), and the annoying necessity of having to use tuc-tucs to get around (unless you own or rent a car), I am starting to conclude that El Gouna is a nice place to visit for a week, but only in April and October:  the rest of the time, the weather is simply too extreme, and when you add all the other factors I have been documenting in this blog, I think you have to conclude that Gouna was a really nice idea, but one that would have resulted a far pleasanter (albeit deeply elitist) place had ORASCOM not made the mistake of opting for growth instead of upscale quality and moderate development.

If El Gouna was composed mostly of exclusive stand alone villas, that would have rendered the place into a sort of high-end gated boating community  — the Stuart Yacht Club near where I live in Florida comes to mind — but with more widely spaced properties, and a strong emphasis on eco-tourism, which is not the case to–day in Gouna, with the dive and snorkeling boats dropping anchor willy-nilly on the shrinking coral beds.

I would have eliminated all the stupid nightclubs and wasteful golfing (golf in the desert, really?); severely restricted the weekend baladi crowds from entering during all these interminable Egyptian holidays; and do other small but important quality of life things, such as ensuring the pool and other workmen do not constantly hang around (after their morning rounds are done) such that you are compelled to always have to say hello to these people any time you take out the garbage or go for a walkabout.

I would be in favor of forbidding the evil tuc-tucs from cruising around all the time, racing each other, and looking for passengers (and annoying tourists with this Egyptian taxi driver habit of beeping at anyone they see walking on the street); enforcing draconian rules about noise; and banning all smoking at restaurants, indoors or out.

Instead, El Gouna is gravitating toward being another Hurghada, which is a shame, as there was no doubt an opportunity to do something special here, once, but now it’s gone forever.