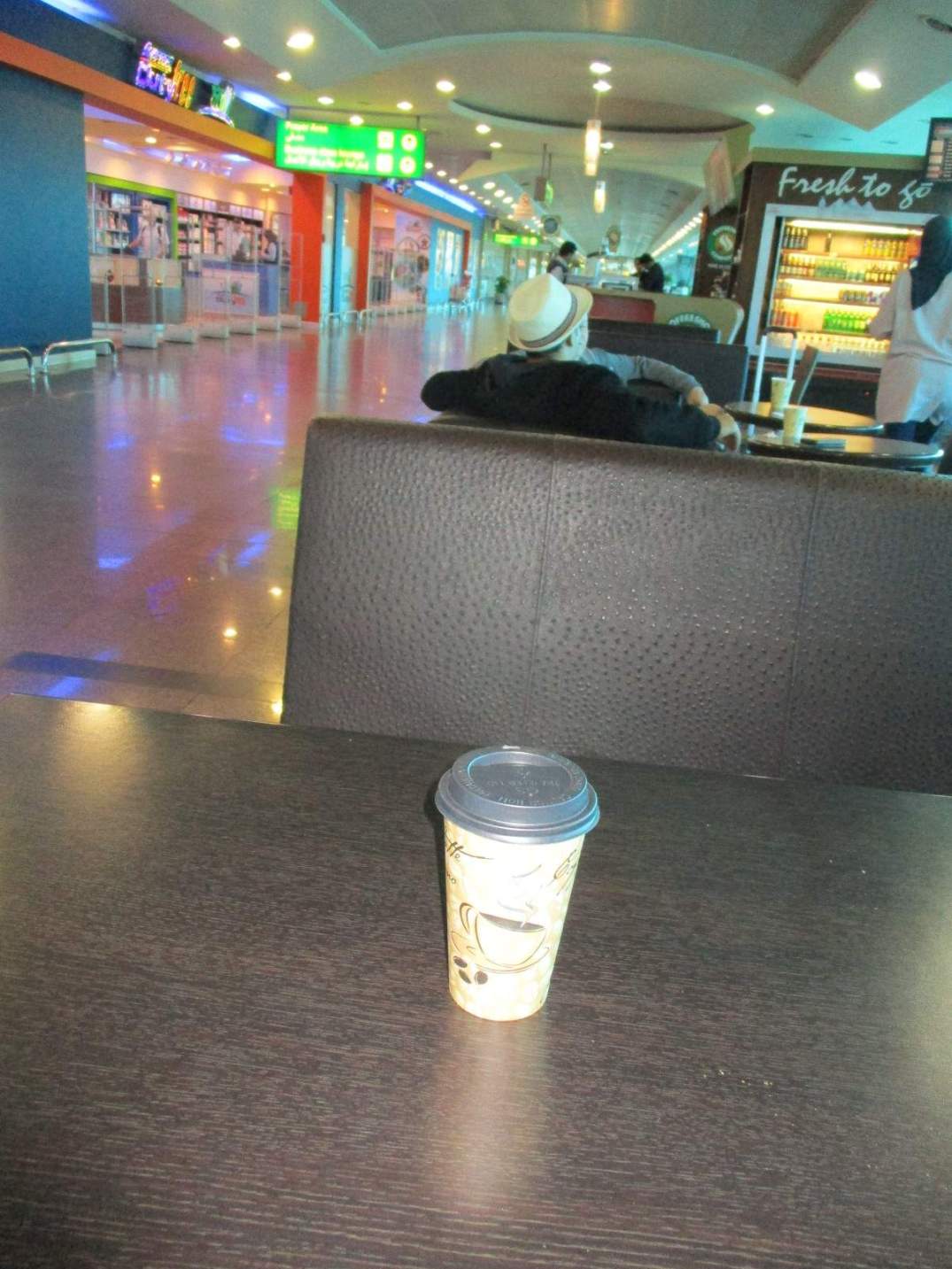 I’m writing this on Saturday, April 14th, at Cairo International Airport. It’s 8am.  Three and half hours wait before I can board the flight back to NY.

I was able to access the Internet via the non-secure (ie they don’t support https) free WIFI here, but they only give you 30 minutes gratis. So I caught up on the attack on Syria; it looks like it’s over for now, judging by the news, and that my flight will leave as planned.

That’s a tremendous relief; but had the flight been cancelled or further delayed (it was originally supposed to leave at 9:30am, but now boarding is at 11 something, and the flight is supposed to take off 30 minutes past noon.

I inquired about upgrading to Business Class when I arrived from El Gouna. The ticket agent quoted $500, and apologized for it being so high, but explained to me that my ticket was class 0, which he characterized as “low-class.”

Fine, so I’ll remain in steerage with all the other low brows.

Leaving Gouna ended up being quite the adventure.

I stopped eating on Thursday, because I cannot tolerate going to the bathroom on airplanes.

By the time I arrive in NY, it will have been 3 days without food.

But Mum in NY where I am going first, before continuing on to Florida on Tuesday, is going to have some nice soup waiting for me, and some ham too.

It’s been 7 months since I have had ham (I don’t even know if you can buy it in Egypt), and one good thing about that — apart from going back to eating normal American food — is that it will be guaranteed to NOT produce stomach issues.

Then I arranged for the real estate agent to come by, so we could settle accounts. He said he would be there early in the morning on Friday.  The idea was that he would arrange for the laundry to be picked up, and would return the balance of the $200 I left him when I moved to cover utilities.

I waited and waited, trapped on my last day in Gouna waiting indoors for this guy, and then finally I was able after numerous emails to get in touch with him at 1PM and he acted like he didn’t remember that agreement.

So I said, look, I am leaving the house at 3:30am tonight, so if you want to inspect the villa for any damage and get the utilities bill for the month from Oroscom so we can straighten things out, then it better be soon. He said he would call back in 1 hour. I never heard from him again. Maybe he forgot again, or maybe he figured if he didn’t show up, that he could just pocket the difference.

I packed my bags, and threw out the garbage, and decided to try to nap at 7PM for a few hours, because I knew I wouldn’t sleep a wink on the long flight back. I set the Galax 5 on alarm for 2am, and started to doze in front the TV. Finally by 10 or so, I dozed off but woke up shortly thereafter from a stinging sensation on my hands and leg.  I looked at them, pissed; welts all over. A particularly vicious skeeter had managed to get in the house on my last night. So I sprayed myself with foul-smelling OFF!, and lit a citronella candle, and turned on all the light in the living room. I didn’t get bit after that, but I didn’t sleep either. I am really glad I am finally getting away from El Gouna pestering insects that ruin the quality of life there.

Around 2am, I shaved and showered, made sure I took care of any remaining business, and then kicked back to watch CNN on the crappy TV (non HD, and very poor reception through the standard Gouna fiber connection). As I waited for the taxi, my Mum emailed to tell me her followup visit with her doc went great, so that was terrific news.  I’m getting ready to leave and then suddenly on CNN they announce Trump is going to give a press conference about Syria. They hinted that the missile strike had already started. Shit. I mean not to be horribly insensitive, but would that mean my 12:30PM flight to JFK would be delayed even more, or worse, cancelled?

The taxi guy showed up on time, and then he basically careened at high speeds (the speedometer read 90km, or 55mph) over pitch dark desert roads with lots of speed bumps — which did wonders for my spine, and the cab’s shocks were kinda worn down — but we finally got there okay.  I left him a nice tip, because now I have to get rid of the extra Egyptian money I have left: a thick wad of bills that amounts to a little over 30 dollars.

So at this point, I am getting a little miffed.  I wanted a nice orderly exit from El Gouna, but instead of that, the real estate guy never shows, the skeeters take their vengeance one last time, Trump announced some sort of missile operation on an Arab country that’s not that far away, and I’m stuck in a car with a crazy driver in the middle of the desert and then I have to lug heavy luggage around with a sore back.

At Terminal 2 in Hurghada, I go through the tedious two security lines (one to get in the door, the other to access the departure lounge:  it must be a make-work thingie), check my big valise all the way to NY, and wait for the plane. We board soon enough, and then they close the cabin door (there’s only one open, up front), and a stewardess (or should I say flight attendant) announces the start of the Emergency Instructions thing.

Screens drop down, and a video starts rolling.  But instead of instructions, it’s a religious person who starts reciting part of a sura from the Quran.  So here we are, idling on the tarmac, with missiles flying into Syria, and there’s that. I remind myself I have to watch the final episode of the Looming Tower on Hulu next week.

We arrived safely at Cairo airport, despite the briefly alarming Quran thing, and I went to the second floor causeway (where I hooked up with my wife in January), and ordered a large Cafe Latte. 50LE, which is highway robbery, but I have another three 50 LE bills to get rid, and lots of time to kill.  There’s three hours to go right now. I think I will at least 1 more, but only after browsing in the Duty Free shop to see if there is anything I can get for Mum or my wife that will eat up whatever Egyptian money I have remaining.

I tried to call my aging uncle in Cairo to say goodbye, but alas, could not get through: I was out of Egyptian cell phone minutes, which is kinda of shambolic.