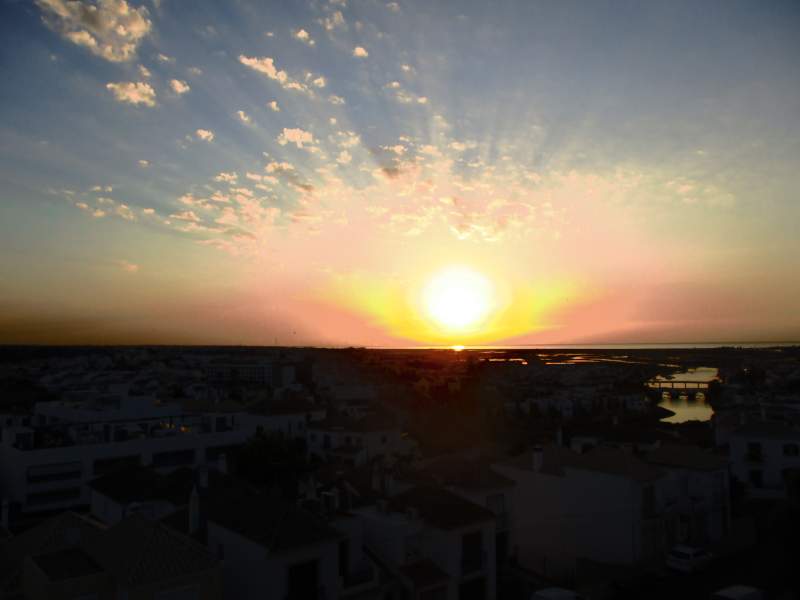 The day started out with a gorgeous sunrise over the Atlantic ocean.  I went to town while my wife was still asleep, and bought a few things, including OJ, white sugar (they did not sell cubes of brown sugar) and freshly baked croissants, which were still warm.

The first, and very important Portuguese word I have learnt is obrigado — thank you; storekeepers appreciate it when you say it, after concluding a purchase, as it serves to terminate the transaction, but also show that you have made the effort to learn basic Portuguese.

After breakfast, we decided to go to the legendary enclosed market at water’s  edge.  This area used to where the tuna commercial fish catch was brought back to be sold and/or processed; now there are simply colorful ferries that take you to Ilha de Tavira (the island of Tavira), and a large indoor country supermarket.

To get there was a short walk along the Rio Gilão, which empties out into the coastline waterway that separates the mainland from the barrier islands that run along the Eastern Algarve.

Tavira island is where the nearest beaches are, which we plan to visit next week — when it cools off a bit. We saw fresh water fish in the river. Don’t know what these are, but we also saw minnows.

There are a bunch of funky tourist trap souvenir shops in this part of town.  The whole place has a pleasant run down feel to it, though there are nearby construction cranes, which indicate that we’re nearing the end of the line for largely unspoilt, under-developed Tavira.

I bought a patch that I am going to have sewn on to the back of my Che shoulder travel bag.  The patch was not on display, but hidden in a draw behind the counter. So now a side project will be to find a costureira (seamstress) to finish the job.  I want it to look like this.

The market itself was quite enjoyable, but I was a little concerned that most of the fishmongers and butchers and vegetable stall owners were in their 50s and up.

Where is the next generation of market retailers going to come from?

That aside, I loved the pungent smell of freshly-caught fish that wallops you as soon as you enter the building.

We bought various things, including fig jam and olive oil and 1/2 kilo of meatballs that we later fried in the olive oil, using the induction stovetop back at the apartment.  Induction ovens are definitely strange, and do take some getting used to.

At any rate, I am thinking of buying a bottle of fig liqueur to take home as a souvenir, the shape of the bottle is quite attractive.

Here are some pics of today’s adventure.

Based on this little excursion, I think it is entirely possible to have 2 people spend a maximum of 10 euros a day on fresh food. So even though restaurants are generally cheap (except for places like Artefact), you can eat well here on a modest food budget.

In the evening we rested at the apartment.  Since it has a commanding view of Tavira, you don’t miss out on much by chillin’ out on the huge balcony.

I need to rest my now sore leg muscles (from the steep stairs up the hill that you have to take to return to our rental, a path more suited for young goats than someone in his deep 60s):  tomorrow is a big day, with lots of activities planned, so I can’t be hobbling around like a gimp.

That night, I went to stand for a few minutes on the large, L-shaped balcony at the place I’m renting.  We’re on the top floor, which meant the view of the stars and an almost full moon was unobstructed.

A cool wind from the west had picked up, and I could sense the first hints of the approach of winter.  I felt not quite a shiver but un frisson, brief, yet unexpected after the heat of the day — the merest suggestion of a shiver, as if touched by invisible fingers, which is how Saramago phrased it.  I stood on the balcony for a while, looking down at a sleeping town where all was quiet.

How enjoyable it was not to have to deal with the grating noise of Gouna’s barbaric dance clubs, as I had to earlier in the year. It is quite noticeable how the Portuguese do not feel compelled, as Egyptians do, to make a racket at all hours of the day and night.

Here, night is for reflection and sleep.  The wind carried the scent of the Algarve mountains, in the rural back country, where wild medronho and olive trees grow in abundance.  Some of the latter have been around long enough to see the Moors come and go.  The oldest Portuguese olive tree, from the time of the Romans, is in nearby Santa Luzia, where I hope to see an English cousin in a few weeks time.

I felt a sense of contentment.

After taking in the night air, and telling the moon I would see it this full one more time before leaving Tavira, it was time to retire:  after all, Saramago’s The History of the Siege of Lisbon was waiting impatiently on my bedside table, and the story of the fall of the Moors beckoned.