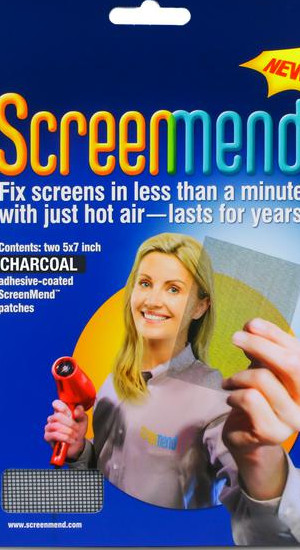 As part of my impersonantion of the late Bob Vila, I now have to figure out how to fix a smale hole in the metal screen that encloses my porch.  This was probably caused by Mr. Squirrel, an aggressive tree rodent who lives in the area and is constantly clambering over the porch screen with his nasty claws.

Luckily, I was able to find a product that may do the job with a minimum of fuss — just a hairdryer seems to be all that is needed in terms of tools. I hope I can find this product at Lowe’s, where it costs $8.58 (Amazon is 2 bucks cheaper, but you have to wait, same price range with Home Demon — but I don’t shop there for reasons that go way back to when we lived in CT and they screwed up a pricey home improvement project.)

Much like my screen, it is not difficult to see far more serious fraying in other things that lurk unpleasantly at the edge of my consciousness. The corruption, vulgarity and stunning simple-mindeness revealed by taped conversations and books with and about a mentally unbalanced vulgarian temporarily in a position to wreck the planet at the press of a button makes you wonder how long this — by which I mean the right-wing, full-bore assault on the American experiment in democracy — can go on.

This week we will also be treated to the grotesque sight of of two criminally-inclined pols smilingly announcing to the world their views on “peace” in the Middle East. Whatever this fatuous proclamation turns out to be, I am sure it will be applauded especially loudly by the evangelicals in this country, bizaroid Rapture cultists who fixate obsessively on the part of the world that I come from, when perhaps they might be better off focusing their attentions on fixing the many problems in their own backyard, and leaving that which does not concern them alone.

I shall be paying scant attention to this week’s helping of political drivel, which thankfully emanates far enough away from my back porch that I can simply ignore it — even though Mar-a-Swampo, unfortunately, is far too close for comfort, ditto the shameless halls of corruption in Tallahassee.

Soon Geneva is arriving this weekend. Nothing else matters. And there is still much work to do — other than patching up the screen — in terms of German sheppie-proofing the lanai and turning it into a pleasant doggie habitat where we can contentedly while away the hours away together in glorious poochy bliss. I expect the entire world outside shall completely vanish for a least a month, while she get acclimatized to her new surroundings.

There’s major jobs to be done, man, to borrow a pretentious biz speak phrase (aren’t they all?), whose originator, sadly, suffered a terminal disruption last week. Peepee training lessons, visits to the vet for shots and making sure she is sound physically, the begining of emotional bonding between my wife and her new  little girl, who very soon will be a very big girl (with impressive teeth and a serious bite to match), thus requiring extensive socialization to make sure she doesn’t get into trouble.

This week is also when I am going to be signing a contract to replace the sliding glass door that leads to the back porch.  This is an expensive project. If all goes well, the install should take place around April.

In general, I am devoting this year to simpler living, less travel and ignoring the sort of anxieties that have caused my blood pressure to rise to dangerous levels in the past. Wala yi hemak, as my Egyptian grandmother used to say: don’t give it any mind.

I read this morning a really interesting article about dog language learning skills. There is much, apparently, that we can discover about ourselves as a species through interaction in noisy rooms with our dogs before oversharing about it on social media.

Having being alive since before there were smartphones, and in fact, not only before there were PCs, but before the IBM 360 mainframe was invented, I can say with 100% degree of confidence that the world is not a place where you naively go find friends.

As the saying goes, if you want one, get a dog.