I’ll soon be driving up to Lowe’s to get another set of Adfors Screen & Storm Door Grilles. I’ve decided to use these to protect my patio screen when Geneva arrives in a week and a half.

I also need to get a 30-ft extension cord, for the drill, as well as some white Rust-Oleum spray to protect the grilles from rusting.

To touch up the beams that hold the screens place, I need to get a brush, some Rust-Oleum Rust Reformer, and white water-based acrylic paint that is specifically made for painting metal surfaces.

This is turning into quite an expensive project!

I should look into getting affiliate commisions to help pay for all this stuff.  Maybe in some other life.

I’m expecting to  pick up the doggie pool in the next day or two at my local Ace hardware store. It was hard finding this “seasonal” item, even though in Florida the season is always either hot or hotter.

Ace sent me an email saying that I need to produce a picture ID when I go pick it up.  Yeah? Sounds a bit over-the-toppish for a $12 item. I will actually refuse to let them make a copy of my driver’s license if they ask me to hand it over. There are limits.

This weekend, I will also be adding a chaise longue to what I have decided to call Geneva’s habitat — the name for the soon-to-be luxurious, screen-enclosed lanai at the back of our Mediterranean- style villa.

When I get back from the Lowe’s run, I’ll think I’ll go for my traditional morning bike ride. Didn’t yesterday, and I missed it.

Then, instead of watching the orange clown impeachment circus on TV, I’ll finish cleaning up the screen beams instead.

To do this, I have to get up yet again on a scaffold and stand maybe 4 feet or so off the ground atop a rectangular plywood platform.  At first I was super careful doing this, as I was not sure how stable it was or if I would inadvertently step off it as I moved around.  I currently weigh over 250 lbs.  Plywood. The word gingerly comes to mind.

But now that I have been doing this, off and on, for about a week, I feel more self confident clambering up and down that thing — though I do wish I was 50 lbs  lighter. Things would be so much easier.

By next weekend, all this is going to come together, and Geneva’s habitat will turn into a nice, large, mold free (it rains a lot in FLA, and is often quite humid) enclosed area where she can play with her toys to her heart’s content, and eyeball the squirrels (hence the need for the grilles, which are not to be confused with the grill I will used for cookouts) and large tropical birds that wander and wade about.

It’s there that I plan to start to teaching her various commands. I hope she won’t eat the Blue Daze, sage, rosemary and thyme that I grow there in terra-cotta pots. 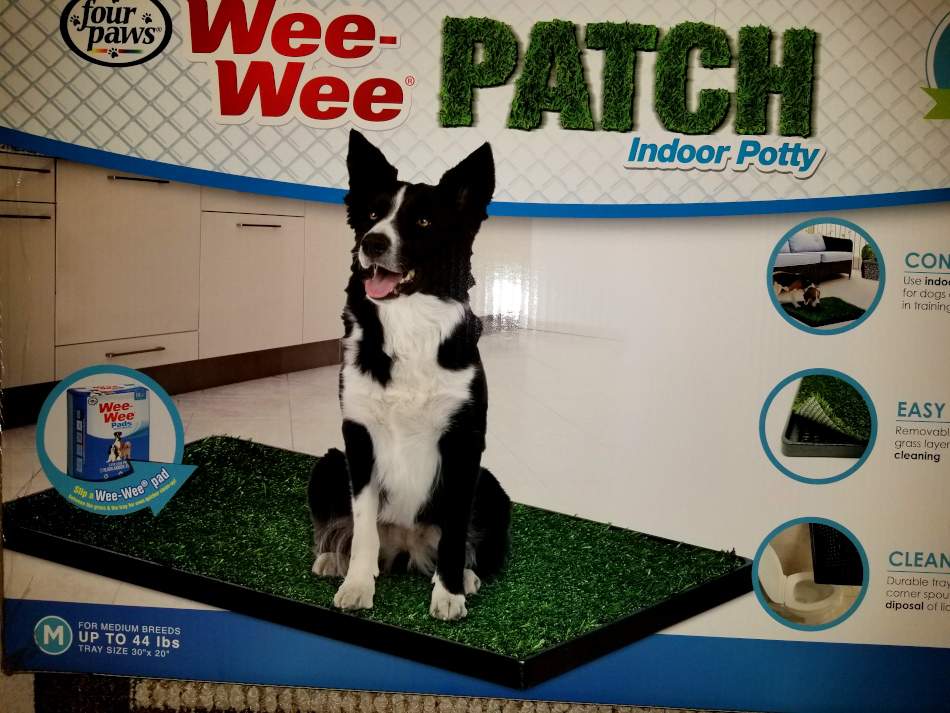 By the way, my wife insisted that we buy a Wee wee patch.  Not sure how good an idea this is, but I finally relented ($50 ka-ching!). We’ll soon see how that goes.

Hope I don’t end up being the only one to hose it down every day!