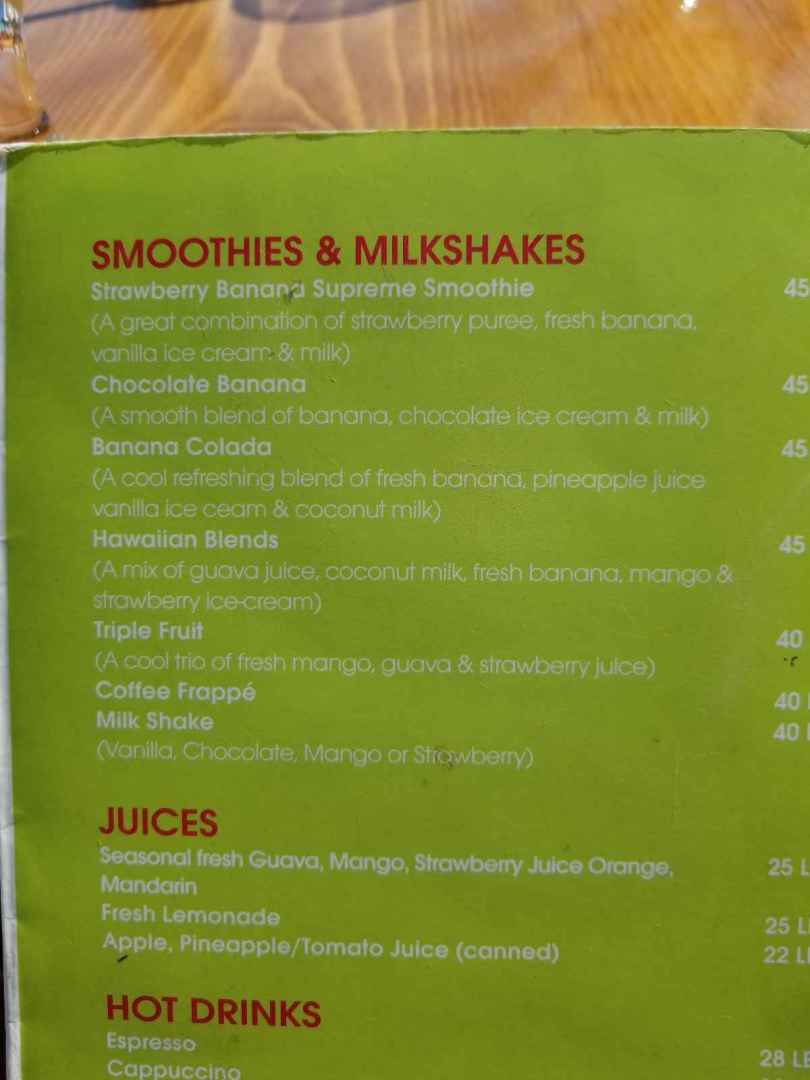 Today we went to downtown Gouna to do some shopping.  We bought a few souvenirs, then we decided to have a juice drink at Jobo’s.

I chose the first drink listed under “Juices,” the one that offered “Seasonal fresh Guava, Mango, etc…” for 25LE.

Then I asked in Arabic the waiter why this drink was more than the trio of fresh mango, guava and strawberry, listed at 40 LE.

He replied he did not know. So I said never mind, and ordered 2 of these juice drinks.

The waiter goes away, but some other waiter comes by, and says how are things going?  Now, we had already ordered, but I decided to be friendly, and mentioned that our waiter did not know why the price difference between the two similar drinks.

So this waiter immediately said one is canned juice and the other fresh.  I let it go, even though the drink we ordered said nothing about being canned.  (There was one drink on the menu that said that, but not on the one we ordered).

Then this waiter goes in the back, and there is some loud discussion, and then the original waiter comes back with what looked like the drink we ordered, and not like the Trio, which we had ordered a couple of days ago. We finished our drinks, and I asked for the bill.

So I called the waiter, and said why is there a 30 LE difference in price?

He said he did not know.

Then the other waiter came over, and started talking loudly to us, so I cut him off immediately — in Arabic — and told him to go away, as I was sorting this matter out with our waiter, not him.

The guy left in a huff, and I turned to the inexperienced waiter who had brought us our drinks.

In Arabic, I told him, look, I am going to pay 80 LE for these drinks, even though the bill should be 50 LE.

But you switched my order without asking me, and what that means is that you shall get no tip, and you shall never see me in Jobo’s again.  You cannot expect to trick people, I continued, and get away with it (I used the term “idhak ala el nass,” which literally means laugh at people, or trick them, in colloquial Arabic).

I know many tourists have left, but the atmosphere in Gouna is getting a bit desperate.  The tuc tucs are starting to resemble the persistent flies that pester us by the pool, as the drivers know the hammer is about to drop on half them any day now.

Meanwhile the merchants are trying charge unsuspecting tourists absurd sums for simple things like plain white cotton tees (300 LE for one that has “Gouna” stenciled on it).

Two days ago, we came here, and ordered burgers.

Unfortunately, my wife’s hamburger was under-cooked, even though she had repeatedly asked for it to be well done, and there was also a hair on the coleslaw, which she left untouched, but did not complain, as to not cause the usual tedious Gouna/Egypt scene of several waiters coming to your table when there is an issue, and talking loudly in a way that is very embarrassing to most customers who are here to relax and not argue with waiters.

Bottom line when it comes to Jobo’s.

A place to avoid.

Don’t ever say you weren’t warned!