Yesterday, Erin played her last game of tennis of the season with Murid, the pro at the Gouna Tennis Club.

He is a pleasant chap, and is quite skilled at returning the ball such that you don’t have to run too far to get it. And as with most tennis pros, he has  an amusing, good vibe patter that he uses to gently encourage those who employ his services to try to push themselves a bit, but not so much as to turn tennis playing for fun into a tediously competitive ordeal.

After tennis, we walked downtown to have a Gounaman Special at Zomba’s (see previous post). We strolled around a bit beforehand, as I wanted to inspect the ridiculously overpriced menu at the Swiss House.  I was considering inviting Erin for an extravagant dinner there, but after seeing the “Dear guest, we are pet and smoker friendly!” on the door, we took a pass. Overpriced, and in all likelihood, mediocre schnitzel would be bad enough, but being stuck in a small room with a bunch of smoking, jolly Germans in evening jackets, dining alongside their Schäferhunds would be absolute torture. 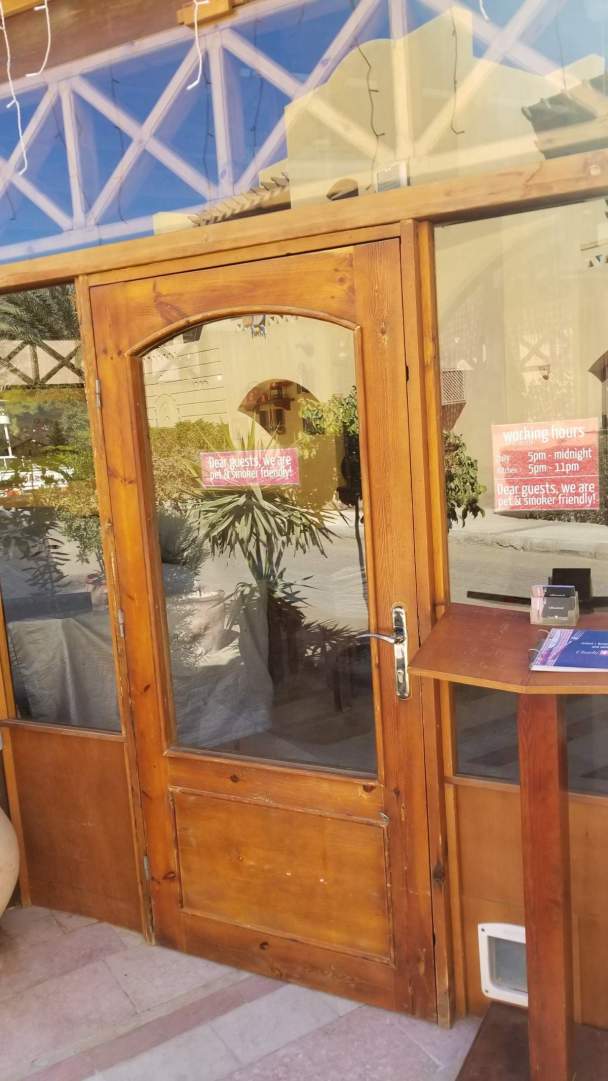 As we were contemplating the menu, agog at the prices, a tuk tuk driver stopped in the street and commenced bothering us.  Tuk tuk? he said. Tuk tuk?  We ignored him, but the driver would not go away. Tuk tuk?  Tuk tuk? he kept repeating. We still did not look at him, and pretended to be deeply engrossed in the Swissie House menu, which was on a stand by the entrance.

Many Egyptian men love to be noticed. To be acknowledged. They are overly social, constantly talking to one another in every possible setting in loud voices, shaking hands at every possible opportunity, kissing each other on both cheeks by way of greeting, constantly forming little impromptu social groups on the fly in the street, staring at every passer by, especially young women and foreign tourists, always on their smartphones talking important-sounding rubbish (usually something involving money) to friends and family, waving, gesticulating, blowing their noses with their fingers out in the street without hesitation, and of course honking their car, motorbike or tuk tuk horns incessantly, wherever they happen to be, Cairo, or El Gouna.  In fact, the average Egyptian would probably honk his horn on a desert road with no traffic, just to hear the sound of it; or perhaps it’s that he wishes God to finally notice him.  The truth of the matter is that the average young Egyptian wants his presence felt; he wants it to be known that he is here, that his existence has some impact; that it matters; that he is not some irrelevant speck of humanity in a vast ocean of Egyptians; that his life means more than zilch in this world.

Unfortunately for this tuk tuk driver, this was not to be — at least not in a manner that he anticipated.

Upon seeing that the two tourists (my wife and I) he had targeted were not even acknowledging his presence, the tuk tuk sawa’ starting talking in Arabic, not realizing I speak the language.  Eh, mish hat bussu allaya?  Tayib, anna ha’oud henna ikhayit mat bussu, which roughly translates to: what?  you’re not going to look at me? okay, I will stay here until you look at me.

This now had turned into outright harassment.

Luckily we were near one of the drop off points in downtown Gouna, where there are usually many security guys.  Seeing me walk away, the tuk tuk guy drove off, satisfied that he made an impact, however negative, in someone else’s life. He had won  He was not just a loser Egyptian schlub driving a tuk tuk for a living, a zero that no one noticed or talked to except as an occasionally useful social inferior.

I made a bee line to the security guys, knowing that in all likelihood that the annoying tuk tuk would do the usual laffa that most tuk tuks perform in that part of town, and circle back to the dropoff point.

Two security guys were standing there, so I angrily told them in rapid Arabic how my wife and I were being harassed. And just at that moment, the tuk tuk driver appeared, and I pointed at him: howa dah, I exlaimed, that’s him!

The security guys immediately sprang into action. They stopped the tuk tuk, and ordered the driver to get out of his vehicle.

It was deeply satisfying to see this young man’s expression change from a smugly taunting, predatory smirk, to one of complete disbelief at having been so quickly busted by an apparent affrangi. I walked away, knowing that at least one of Gouna’s aggressive tuk tuk drivers was in deep shit for something they do here all the time with impunity:  pester tourists who are simply trying to enjoy their time in Gouna. Most likely this son-of-a-bitch was about to have his license to work in Gouna revoked, and be banned for at least six months from having any form of employment in this resort town.

Do I feel a pang of liberal guilt over that?

Of course I do.

The moral of the story is this.

To all tuk tuk drivers: we all know and appreciate how hard it is for you guys to make an honest living, and respect that. But in return, please always treat with respect the tourist upon whom you depend to make ends meet. And just for laughs, here are few other pointers you may wish to consider: